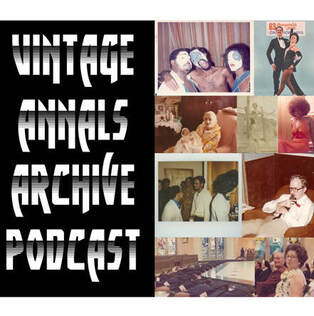 VINTAGE ANNALS ARCHIVE PODCAST
​We talk in depth with the people creating the culture we're obsessed with, and bond with them over their own obsessions, whether it's weird pop culture, vintage ephemera, taking the perfect photo, or telling the perfect story.

APPLE PODCAST LINK
*The podcast won't be in Apple Podcasts for a week out so but you can still paste in the RSS URL to the apple poycast app and listen and subscribe there. Go to library, hit the dots in the upper right click "add new feed by URL" and paste it in https://anchor.fm/s/937752ac/podcast/rss

Based in beautiful West Philadelphia.
​https://open.spotify.com/show/03Uw2VBTBPhdSJspGfMjoO

VINTAGE ANNALS ARCHIVE PRESENTS
HENSON JIM'S B-DAY ZOOM EVENT SEPT 24th 9Am - 1PM
​A fan experience and interactive zoom to celebrate all things Henson. A day of interviews and videos talking to those that knew or worked with Jim, and some
words from lifelong fans and collectors. And a very special surprise guest! 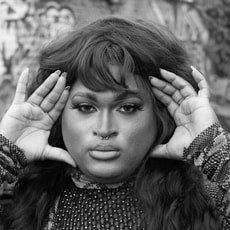 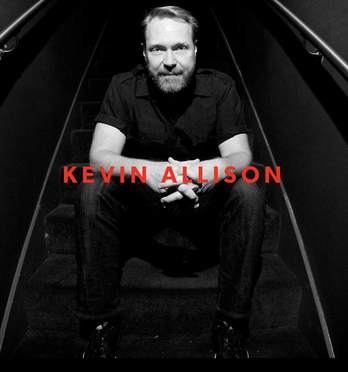 Kevin Allison is the creator and host of the hit podcast, RISK!, where people tell true stories they never thought they’d dare to share. Since Kevin started the podcast as a DIY passion project from his bedroom in 2009, RISK! has grown to have millions of downloads per month and legions of ardent fans around the world. It has featured incredible true stories from famous folks like Janeane Garofalo, Marc Maron, Aisha Tyler, Trevor Noah, Margaret Cho and more, as well as ordinary people from around the USA and beyond. Slate.com called RISK! “Hilarious, jaw-dropping and just plain touching,” and Rolling Stone named it one of its top podcasts. Kevin is also the founder and lead instructor of The Story Studio, a storytelling school which offers classes around the USA and online, and corporate workshops domestically and internationally.  Kevin is also the editor of the book adaptation of RISK!, which features many of the best true stories from the podcast, with an introduction from Kevin. The RISK! book was published by Hachette Books in summer of 2018. As an actor, writer and comedian, Kevin began his career as a founding member of the legendary sketch comedy group, The State, whose cult classic show aired on MTV from 1993-96. More recently, Kevin has appeared in shows such as Reno 911!, Flight of the Conchords, @Midnight, High Maintenance and more.  Kevin lives in Brooklyn with his cat, Quincy.
https://kevinallison.net/
https://www.risk-show.com​

We will be talking about these photos during the podcast episode 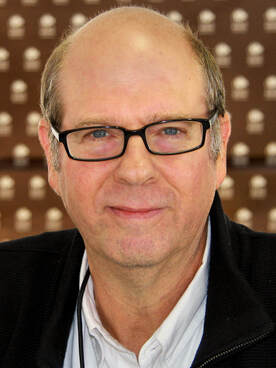 Stephen Tobolowsky is one of the leading character actors today. He has appeared in over 200 movies and television shows. Here is the list: Stephen Tobolowsky at IMDB for credits.
He has played everything from Ned Ryerson in Groundhog Day to Sandy Ryerson in Glee. He has appeared almost naked as Stu Beggs on Californication and has worn the same suit for seven years as Principal Earl Ball on The Goldbergs. Stephen currently appears as Dr. Leslie Berkowitz in the new generation remake of Norman Lear's One Day at a Time. Seasons 1-3, at present, are still available on Netflix.  PopTV and CBS aired Season 4.  Hopes are high for more episodes as soon as safe filming practices can be set in the pandemic era!
Please read here for the One Day at a Time journey.
Stephen has always been a storyteller. In sixth grade he won his school’s storytelling contest and over that summer won the award as best storyteller in the City of Dallas (13 years old and under division.) That impulse led him into writing. He wrote the screenplay for True Stories with David Byrne and Beth Henley.
He wrote and performed his storytelling films Stephen Tobolowsky's Birthday Party and The Primary Instinct.
His labor of love has been The Tobolowsky Files, created with producer David Chen. What began as a behind-the-scenes movie podcast has become a sometimes funny, sometimes compelling portrait of a human life - as described by Miles McNutt here.
“The Tobolowsky Files” is available at tobolowskyfiles.com and on Apple Podcasts. Early episodes were also previously broadcast on KUOW 94.9 in Seattle, on WFPL in Louisville, KY and many stations through Public Radio International (PRI).
He has two books of stories published by Simon & Schuster: The Dangerous Animals Club and My Adventures with God.
https://stephentobolowsky.com​ 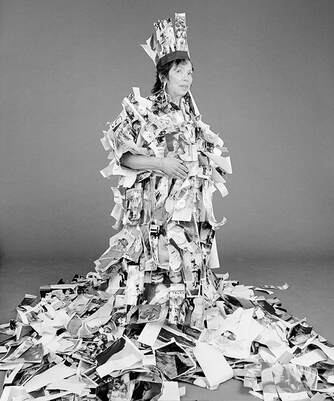 Meryl Meisler was born in 1951 in the South Bronx and raised in North Massapequa, Long Island, NY. Inspired by Diane Arbus, Jacques Henri Lartigue, and her dad Jack and grandfather Murray Meisler, Meryl began photographing herself, family, and friends while enrolled in a photography class taught by Cavalliere Ketchum at The University of Wisconsin, Madison. In 1975, Meryl returned to New York City and studied with Lisette Model, photographing her hometown and the city around her.
‍After working as a freelance illustrator by day, Meryl frequented and photographed the infamous New York Discos. As a 1978 CETA Artist grant recipient, Meryl created a portfolio of photographs that explored Jewish Identity for the American Jewish Congress. After CETA, Meryl began a 3-decade career as an N.Y.C. Public School Art Teacher.
Meryl was honored with the 2021 Center for Photography at Woodstock Affinity Award. She is included among The Hundred Heroines – a celebration of Women in Photography. TIME includes her in their selection of women trailblazers in photography: The Unsung American Female Photographers of the Past Century.
Meryl has received fellowships, grants, and residencies from the New York Foundation for the Arts, Light Work, Y.A.D.D.O., V.C.C.A., Lower Manhattan Cultural Council, The Leonian Foundation, The Puffin Foundation, Time Warner, Artists Space, C.E.T.A., the China Institute, and the Japan Society.
Her work has been exhibited at the Brooklyn Museum, Brooklyn Historical Society, Dia Art Foundation, MASS MoCA, Islip Art Museum, Griffin Museum, Annenberg Space for Photography, the New Museum for Contemporary Art, New-York Historical Society, Steven Kasher Gallery, The Whitney Museum of American Art and in public spaces including Grand Central Terminal, South Street Seaport, Photoville and throughout the N.Y.C. subway system. Her work is in the permanent collections of the American Jewish Congress, ARTPPOOL Budapest, AT&T, Bibliothèque Nationale de France, the Brooklyn Historical Society, Book Art Museum- Poland, Columbia University, Emory University, Islip Art Museum, LaGrange Art Museum, Library of Congress, Musée de la Poste Paris, New York Transit Museum, Pfizer, Reuters, Smith College Museum of Art, Smithsonian Institute, University of Iowa, The Waskomium and can be found in the artist book collections of Carnegie Melon, the Centre Georges Pompidou, the Chrysler Museum, the Museum of Modern Art N.Y.C., Metronome Library, and Whitney Museum of American Art.
Upon retiring from the N.Y.C. public schools, she began releasing large bodies of previously unseen work. Meryl’s first monograph, A Tale of Two Cities: Disco Era Bushwick (Bizarre, 2014), received international acclaim. The book juxtaposes her zenith of disco photos with images of the burned-out yet beautiful neighborhood of Bushwick, Brooklyn in the 1980s. Her second book, Purgatory & Paradise SASSY ‘70s Suburbia & The City (Bizarre, 2015), contrasts intimate images of home life on Long Island alongside N.Y.C. street and nightlife. Her latest monograph, New York PARADISE LOST Bushwick Era Disco (Parallel Pictures Press 2021) makes her first books seem like fairytales. She has returned to her analog roots in the darkroom, making gelatin silver prints of contemporary images and never seen photos from her enormous archive.
Meryl lives and works in New York City and Woodstock, NY, continuing the photographic memoir she began in 1973 – a uniquely American story, sweet and sassy with a pinch of mystery. ClampArt represents her work.
www.merylmeisler.com 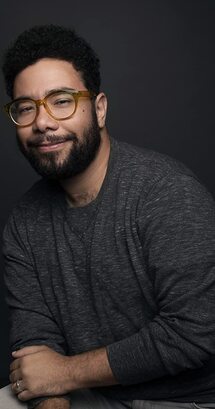 Oscar Montoya is an actor, comedian, and hip hop dancer living in Los Angeles. He was born in a small town in Colombia and lived in New York for a spell, where he was a performer and a faculty member in both the Magnet Theater and The People’s Improv Theater. Oscar has appeared in several national commercials (Lowe’s, Pizza Hut, Cheerios) and various videos for College Humor, MTVOther and Buzzfeed. Oscar currently performs at UCB with Skyjammer, a freestyle rap improv team, and on Harold night. He is also a performer and director for the arts education and media company Story Pirates. He also currently stars in HboMax Minx as Richie. About BJ Snowden
B.J. Snowden is a uniquely talented singer, songwriter and performer who, with only one independently released album to her credit and a handful of live appearances limited to the East Coast, has managed to attract great attention and acquire a following all over the world.
Ms. Snowden's talent was apparent early on when she began playing the piano and composing songs at the tender age of three.  As her interest and talent at the piano blossomed, she decided to study music more intensively at the prestigious Berklee College of Music.  Snowden graduated from Berklee with a degree in applied music (performance), and has earned her living as a school teacher teaching music in school systems from Boston to Philadelphia.  As nightfall beckons however, she dons a sequined outfit, ascends the stage, and singlehandedly performs all of the original music that she has composed.
In a strange but true tale that has taken the status of underground music legend, the staff of a now-defunct East Village record store "discovered" B.J. when they decided to play one of her demo tapes (an item that had been lying around the store for years and was destined for a "bargain bag" of hard-to-move cassettes).  The usually jaded staff was mesmerized by what they heard.  They convinced the store's owner that this was something so wonderful that the whole world should hear it.  Fred Schneider of the B-52's, a frequent shopper at the store, heard B.J.'s music as well, and wholeheartedly endorsed the idea of a proper release.  The album BJ Snowden:  Life in the USA and Canada debuted in the fall of 1996, garnering mentions in The New York Press, Magnet and other noteworthy publications.  B.J.'s music was frequently featured on Irwin Chusid's WFMU show, and she quickly became a listener favorite.  Not long after she was a featured guest on MTV's Oddville, and could also be seen on Comedy Central's The Daily Show.
As a live performer, BJ has appeared at some of New York's hippest music spots, including Brownie's, The Cooler, and CBGB's Gallery.
Based out of Massachusetts, B.J. is always chauffeured to her gigs by her starlet of a mother, and is usually accompanied by her guitar virtuoso son, Andres
​https://bjsnowdenmusic.com
Oct. 29 - Sara Sherr (Philadelphia Based Karaoke)
Nov. 5 - Jim Tozzi (Wonder Showmen/Bert's Tit)
Nov. 12 - Bil Yates (Photographer)
Nov. 19 - Things I Didn't Buy Instagram Account
Dec. 1 - Ed Askew (Musician)
Dec. 8 - Eddie Davis (Musican)
Dec 15 - Jeb Berrier (Actor)
Dec 22 - Alex Wiles (Media/ Activist)
More tba